In late June, I attended the Western Writers of America Conference in Kansas City, MO, which is the trail-head for the Santa Fe, the Oregon, and the California Trails. Kansas City takes great pride in its statuary and its fountains. Two memorable statues in Kansas City for me are the Pioneer Mother (http://bit.ly/2uvkSqz) in Penn Valley Park near downtown, and the Pioneer Crossing Park (http://bit.ly/2t2MXRK) in the nearby Shawnee Mission area of Kansas. Earlier in the year, we detoured east from I-35 to visit Ponca City, OK, to visit the Pioneer Woman Museum, home of an equally well-know statue of the Pioneer Woman.
These memorials pay tribute to the role strong-willed women played in developing the West, as we know it today. While each bronze is unique, all three emphasize the role of mother and child. The family produced a leavening effect on a wild, untamed, and uncharted land. The family reminded all of the fundamental fabric of society, the marriage of man and woman, who were to procreate and work the land.
The society of the mid- to late-1800s placed a multitude of restrictions on a woman’s role. However, the rigid societal structure weakened after crossing the Missouri border into the territories. The nature of the quest forced women to become an active partner, for survival, if for no other reason.
Each of us has our version of the strong-willed, determined woman standing beside her man, reloading the cap-and-ball rifles to ward off marauders. If the man fell, the woman picked up the rifle, continuing the fight to save herself and her children. The surviving woman, now a widow, faced a different life, then as now.
Life for a single mother in 1866 wasn’t all that different than in 1966. If a woman decided to remarry, she uprooted her family to move with her new man. In the process, the mother and the children experience a lot of anxiety about their new life. In my story, Tibby’ Hideout, Bess Newcomb says yes to a traveler who visited her twice a year while he carried trade goods to and from San Antonio. He wrote her wonderful letters. After accepting his proposal, Bess loads her family and their belongings into her Studebaker station wagon to move to Las Vegas.
Wait you say—“They didn’t have Studebaker cars in 1866. Where’d she get a Studebaker?”
Studebaker of 1966 was the same company that built sturdy, reliable overland freight wagons and smaller station wagons in 1866.
What about LasVegas? It wasn’t there in 1866.
No, this is not the one in Nevada. In 1866, travelers on the Santa Fe Trail found Las Vegas, New Mexico, as the welcome last stop on the prairie before climbing into the mountains to reach Santa Fe.
As often experienced by new families, Tibby Newcomb wasn’t ready for a new father, or for moving from Comfort, Texas, and leaving his grandpa behind. Eight-year-old Tibby’s solution was to run-away. His Ma called him the “man of the house,” ever since he could remember. “Got her a new beau—she don’t need me anymore.” Tibby’s childish logic leads him into trouble.
Bess’s treatment of Tibby’s misbehavior may shock some of today’s readers. I remind those readers that in 1866 “Spare the rod, spoil the child,” was more than a sampler on the wall—they put it to practice. Bess gives Tibby a knuckle pop on the head when he says, “dang.” She yanked him up straight by the hair of his head for sassing her.
Tibby finds the ideal place to hideTrue to the Union, Bess fought two battles to defend her home and children. Once again, Bess must step up when her new husband falls wounded. The new family survives the encounter, a little worse for the wear. HEA.
, expecting his mother to leave him behind with grandpa. It’s such a good hideout, a gang of rustlers uses it—much to Tibby’s surprise. A reluctant Tibby leads the rustlers to Bess. In her first story,

The women who settled the west, as portrayed by Bess, became determined and strong-willed to survive the harsh land. The same respect is due those women who ventured west to marry strangers. They were not “came later” or “moved here,” (as opposed to “born here.”) These women rolled their sleeves, pitching in to stand by their men. The memorial statues mentioned in the opening were created to honor all of those pioneer women.

But wait…there’s more!
Tibby’s Hideout is one of my short stories in the anthology of eight western romances called The Posse. It’s available on Amazon, but if you want a free ebook of The Posse, join my blog, Traveling the West, and I’ll send you a copy—free! http://authorfrankkelso.blogspot.com

Bess is the protagonist of a Chapter book series, The Pioneer Woman, I plan to release in the summer of 2018. Bess, her sons Tibby and Isaiah, and her new husband, Joe Robidoux, will have more adventures. 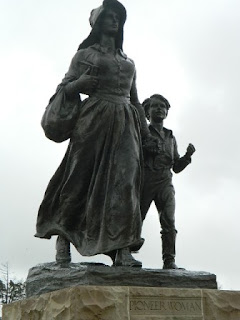