Imagine being the only store or trading post within 500 miles. Those folks who failed to plan ahead and to prepare for every contingency often didn’t survive the harsh life on the western prairie in the 1830-1860s. Bent’s Fort became the primary store for early fur trappers and pioneers in the American West.

If you a visitor - welcome! If you'd like to receive this blog on a regular basis, please join  by clicking the following link. If you join, I'll give you a copy of my western book, The Posse.


Charles and William Bent partnered with Ceran St. Vrain to form the Bent, St. Vrain & Company and build a series of fur-trading posts on the western prairie. The first post, Fort William, now known as Bent’s Old Fort, was constructed in 1833 on the north bank of the Arkansas River. William managed the first Fort. The Arkansas divided U.S. territory from Spanish/Mexican territory south of the river. Spanish Law prohibited entry by Anglos and non-Catholics, which explains why so many French Catholics were among the early traders in Taos and Santa Fe. 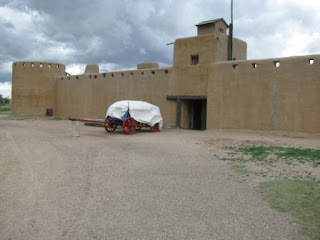 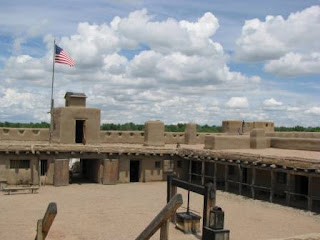 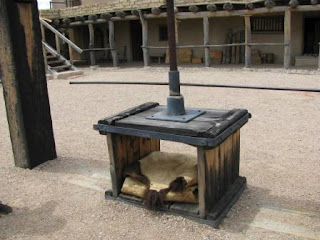 (The press above compressed hides for shipment, making bundles easier to load and ship.)
Bent, St. Vrain & Company built three trading posts; Fort William in 1833, Fort St. Vrain at the confluence of St. Vrain Creek and the S. Platte River (north of present-day Denver) in 1837, and Fort Adobe in 1843 on the Canadian River in the Texas Panhandle near present-day Stinnett, Texas.
The Bent’s employed a crew of Mexican adobe craftsmen who created 2-story log-framed buildings and courtyard walls, which were encased in adobe bricks and often finished with a whitewash slurry to give a decorative appearance. Each of the Forts had a similar style of a defensive wall surrounding the trading post. (The pic below represents the types of items sold at the trading post.) 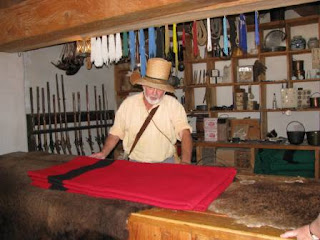 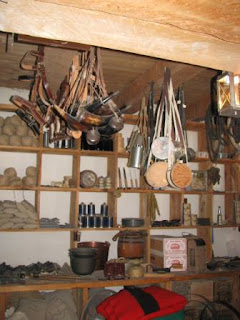 In its heyday, Bent’s Fort became the stopping point for those coming west. In the Spring, the first wagons west from the Missouri River ports of Lexington, Independence, and Westport Landing carried frozen barrels of oysters that had wintered outdoors. The barrels stayed frozen or chilled until they reached Bent’s Fort, where the oysters became a prized, and pricey, item on the Fort’s menu.
In its way, the Fort became an Inn, where traders could rent a bed (not a room) and buys meals at a community table. The upper floors contained gaming rooms and a billiards table.
(The pic below is the billiards and gaming room. Yes, they sold spirits, but to Anglos only.) 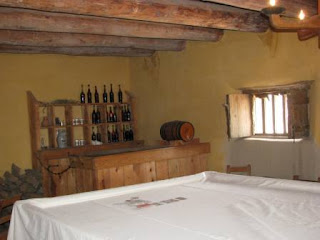 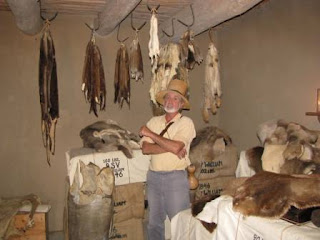 (The pic above is representative of the types of pelts and hide traded at the post in exchange for other products, like powder, lead (shot), flint, and "necessaries," like knives, pots, dry goods (flour, sugar))

Keep in mind, the Fort’s primary role was buying fur pelts and buffalo-hides to ship east (above). The people selling pelts and hides most often were the Plains Indians. The Bent’s insisted the trading posts be treated as neutral territory—they banned truce breakers from trading. The Bent’s had a reputation as fair traders, which is evidenced by the number of tribes who visited and traded with the Bent’s for more than a dozen years. The open ground surrounding the Fort provided ample camping and water for visiting tribes, without forcing unfriendly tribes next to one another.
Pic below is a comon room which held several bds in its original use.) 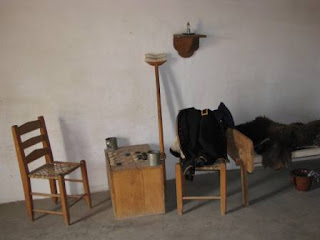 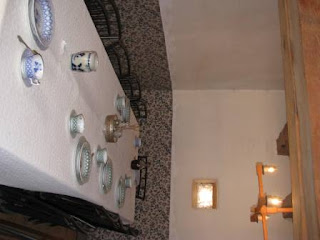 These rooms are on the second floor offering sleeping and meals.

In 1846, following provocations on the lower Rio Grande valley, the United States declared War on Mexico (now independent from Spain.)
The Army took over the Mexican government of New Mexico, replacing them with Anglos from the Area. Charles Bent was appointed the termporary governor by General Kearney in 1847. The Pueblo Indians, angry at years of forced slavery under the Mexicans, saw this as a time to displace all white men, and staged a revolt. Before order was restored by the US Army in Santa Fe, Charles Bent was killed and St Vrain wounded. Several other prominent leaders, both Mexican and Anglo, were killed or injured.
After the Pueblo Revolt, St. Vrain sold his interest to William Bent, and retired to St. Louis with his brother. Ceran St. Vrain returned to the Taos area years later, when hostilities settled.

The US Army drove William Bent out of business by commandeering the fort for several years. The Army’s presence drove away the Indian tribes who once traded there. The Army proposed to buy the Fort and surrounding land from Bent, but negotiations dragged out until the War ended, after which, the Army no longer needed the facility. A civilian official from Washington visited the Fort early in 1849, declared it uninhabitable, and offered Bent little to nothing for the land, which was now bare from thousands of Army horses and mules trampling the land. 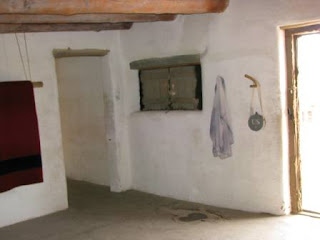 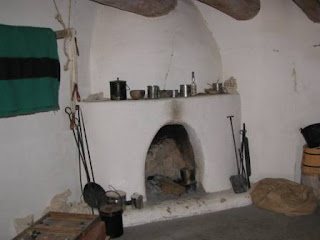 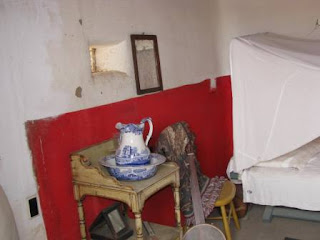 Interior Pics on the ground floor.

William Bent became so frustrated with the negotiations, in 1850 he ordered the Army from his premises. He removed the trade goods of value, taking them north to Fort St. Vrain. Within days of ordering the Army from his land, William Bent ignited the powder magazine, destroying the Fort buildings. Some of the walls surviced for many years. Thus ended an era of US history. 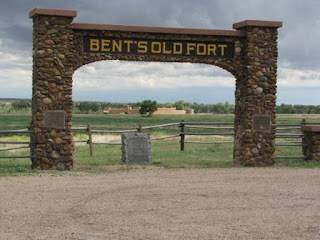 Later, William Bent built a new trading post along the Arkansas, east of the old Fort, which was called Big Timbers for the cottonwoods in the area. Big Timbers never regained the Bent’s status because his primary traders were the Plains Indians, who were fighting a losing battle with the US Army while trying to preserve their way of life.

The next two blogs will relate the history of Fort St. Vrain and Fort Adobe (Also known as Adobe Walls.)

If you are a visitor and would like to receive Traveling the West regularly, please click the following link to join my blog list. I f you join, I'll give you a copy of my western book, The Posse.

Thanks for riding along,
Frank Kelso