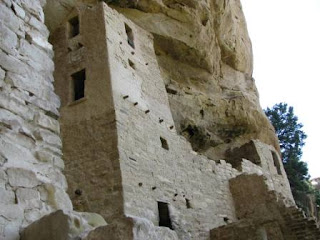 window-headers, and perfectly circular kivas. The only architectural feature they might have missed is the Roman arch. Given they built these buildings between 1100 and 1300 AD, their craftsmanship is remarkable. While the Cliff Palace gets all the attention, there are several different cliff dwellings among the canyons, each exhibiting its own style. These variations may be because the size of alcove under the mesa edge. The Sun Palace on top the Mesa continues their unique construction. They built these dwellings facing south to take advantage of solar heating of the rocks to moderate cold nights. 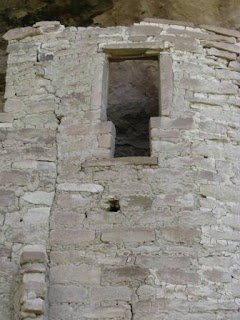 Key-Hole Doors
The Puebloan builders were utilitarian. The main doors were shoulder width at the top, but below the knees, they reduced the width to the space of two bare feet, which creates the "keyhole" effect. While none of their tools and techniques survived, it appears as the builders understood basic geometry. It appears they used a "plumb line" to keep the right-angle corners aligned vertically. But  who knows what they used for a square to keep the corners aligned?
These people created circular kivas by tying twine to a peg and marking the outer edge as they walked the circumference, again basic geometry.
As to twine, the Early Puebloan people were basket-makers before they moved to the mesa, which indicates they developed the basic skills to make twine from natural-fibers, like cactus and yucca; from twine came ropes. Archaeological evidence demonstrates that once living in peace on the mesa, local materials lead them into an era of pottery-makers. (Another post on this later.) 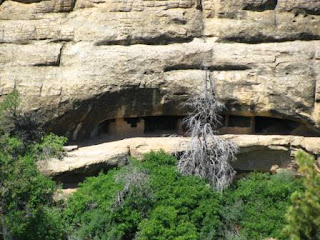 The streams below the cliff dwelling grew ample amounts of cottonwood trees, which grew straight and strong. The Verde dwellers used cottonwood for ladder rails and struts to climb to upper levels. They also used cottonwood, structurally, to support the floors and roofs. The round holes in many of the upper walls are where cottonwood logs once supported the floor of a living space. The basic limestone blocks came from the detritus created by Nature in forming the huge alcoves. The Puebloan construction used no mortar (cement), but they utilized a fine-gravel/clay slurry to coat the walls to make it appear white and smooth. They stained native or tribal patterns on the walls.
This concern for appearance indicates an advanced concept of self-worth, taking pride in their craftsmanship, and in their community.

Please take the time to visit Cliff Palace and the Sun Temple. Spend a few days in the park and a few 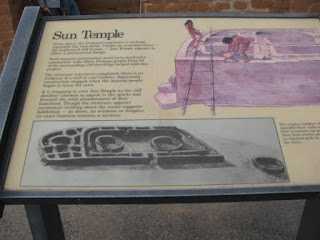 days visiting the surrounding area. West of Mesa Verde, about an hour’s drive, are the Hovenweep Nation Monuments. We spent 10-days in the area and plan another visit.

After visiting the Park, consider staying a few days in Durango. To get an amazing view of the mountains and the surrounding area, take a ride on the Durango-Silverton Railroad. Plan ahead, making reservations for accommodations and the train. Hint: Pay the extra bucks to take the bus ride back from Silverton to Durango. It presents another view of The Million Dollar highway, so named from all the gold and silver mined from these mountains. 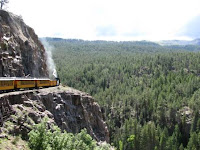 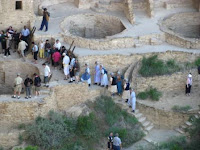 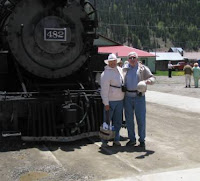 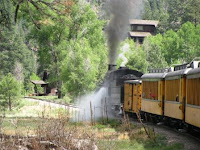