I often write about the eastern slopes of the southern Rockies in New Mexico, and the towns of Las Vegas and Mora, two of the remaining villages from the time when this area was part of Mexico before the Mexican-American War of 1846-48.
Colfax County, NM, borders Colorado on the north. All of Colfax County was part of the Beaubien-Miranda Grant awarded by Mexican Governor Armijo in 1841, and covered 2.7 million acres and extended into southern CO. This property is also known as the Maxwell Grant. Lucian Maxwell was Carlos Beaubien’s son-in-law and inherited the property upon Beaubien’s death in the Pueblo Revolt of 1846. Maxwell defended the grant against Federal claims, squatters, and false claims through 1870, when he sold it to investors.
Maxwell then purchased the abandoned Fort Sumner (known as the Bosque Redondo) from the Federal government for a cattle ranch.
I reference Ceran St. Vrain as a historical figure in my Apprenticeship Series. St. Vrain and Beaubien, French-Canadian fur trappers, were friends who found their fortunes in northern NM. Nestled between two mountain ranges, the large pastures beside the Vermejo river earned it the name, Vermejo Park, in the 1840’s. With Beaubien’s permission, St. Vrain and Kit Carson grazed cattle in Vermejo Park during this period.

In 1960, during Spring break, Tom Curtis, a fellow engineering student, and I visited Vermejo Park Ranch, which consists of over 500,000 acres. Tom’s father was the manager for the ranch’s Utilities service. (They had managers for  Cattle, Horses, Timber, Gas, and Utilities operations.) The ranch generated its own electricity, provided water & sewer/ septic, trash pickup, telephone, and radio for the ranch (no CB or cell phones in those days). The ranch’s north entrance is in Stonewall, CO, and the South entrance is across from the Boy Scout Ranch at Philmont, NM. Each entrance is 30+ miles from the Ranch headquarters.

In those days, Vermejo Park was owned by a Dallas oilman who sold it to Pennzoil in the 70’s, who then sold the land (but not mineral rights) to Ted Turner in 1993. The gas and coal operation, Atlas Energy, LLC, continues independently.

When I visited in 1960, the main house had been destroyed by a fire in the 40s, but a wing survived. The "wing" was large, elegant stone structure. The story is they dynamited the connecting hallway to save the wing from the fire. The legend had it, Douglas Fairbanks, Sr, built the main house when he purchased Vermejo in the 1910s. Ted Turner has restored the main residence and it’s available for luxurious vacations.

In my visit, we fished for trout in the mountain lakes, hunted porcupines with the blessing of the Timber manager. Porcupines like to eat the bark of young trees, which causes the tree to die. In a pure tourist mode, I took pictures of the smaller Black bears and large, spectacular Elk. It was my first visit to the Rockies, and I was hooked.

The Cattle Manager warned us they had just released the bulls into the high pastures. He said, “Give the bulls some space.”
While fishing at one of the high lakes, I heard the bellow of a bull getting closer and closer. When the bull came in view, it became obvious, he hunted a heifer.
I moved down to the water edge, planning to take a swim.
Curtis teased me about being afraid of the bull.
I said, “I don’t want him to mistake me for a heifer.”

I wish each of you a blessed and joyous New Year.
Posted by frank-kelso at 3:48 PM No comments: 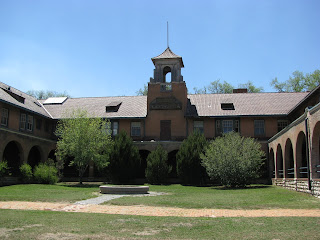 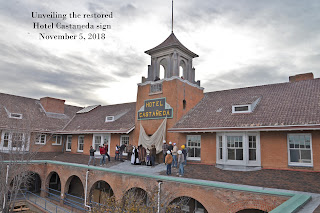 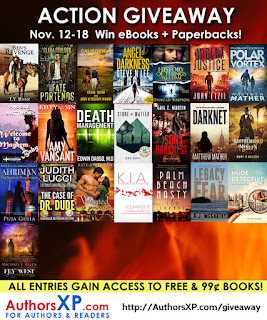 Posted by frank-kelso at 1:12 PM No comments: