I’ll give you a copy of my latest book if you join.

I wrote about the Llano Estacado, the Bosque Redondo, and the Pecos areas in two of my novels (The Apprenticeship of Nigel Blackthorn & A Message to Santa Fe). In a recent visit to the area, I found Ft. Sumner (what there was of it) closed and the Billy the Kid museum a disappointment. The unexpected highlight of my 2-day visit to Portales was the Blackwater Draw National Historic Landmark and, a few miles north of Portales, the Blackwater Draw Museum. 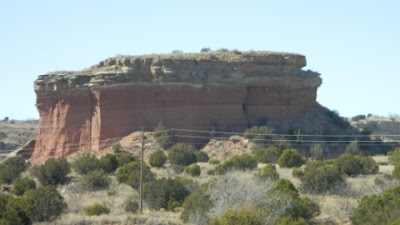 The area near here approaching the Llano Estacado’s western edge lacks the traditional cap-rock walls. The Llano’s edge has shifted and crumbled, leaving several cap-rock mesas along the plateau’s edge. (Pic above.) Driving east toward Clovis, NM, along US-60, there is little noticeable change in elevation until Melrose, where it becomes clear you crossed a ridge onto the Llano. Clovis, NM, the nearby “big city” had its name applied to the discovery of a Paleo-Indian hunting ground from 10,000 to 12,000 years ago.

The Clovis People
The importance of the Clovis people is their campsites’ left archaeological evidence of Paleo-Indian communities long before “conventional wisdom” believed ancestral people existed in the Western Hemisphere. The Clovis People were small, 5-feet-5 or less, weighing as much as 150 pounds, based on skeletal remains. A distinctive feature of the Clovis People was a 5- to 8-inch chert, or flint, spear-point used for hunting the extinct Columbian Mammoth, Giant Buffalo, and Giant Sloths.
An ancient riverbed, Blackwater Draw contains the fossils of thousand of extinct animals from the Paleo-age buried with various designs of Clovis points used to kill these giant species. The Clovis People were nomads and hunter-gathers. Archaeological evidence showed similar Paleo-Indian communities existed across North and Central America. All these communities adopted the Clovis spear-point design to hunt the giant animals of their period.

The Clovis Point.
The Clovis Point design is unique to the western hemisphere. All the points at the Museum are copyright protected, so I offer a drawing representative of an 8-inch Clovis Spear Point. They made a spear-point by knapping flint, or chert, to the desired shape. The top edges are serrated to improve it cutting or piercing ability. The butt-end is fluted to allow it to fit on a wood shaft. The edges around the butt are not serrated to prevent cutting the leather-thongs used to tie the two together. The Museum collection showed points ranging from 4-inches to over 10-inches. The Museum, several miles north of Portales on US 70, is well-worth the visit.

The Columbian Mammoth’s 13-foot height compares today’s African elephant. The Mammoth had shorter legs and a heavier body, weighing 10 tons compared to the African’s weight of 5-7 tons. The Museum shows drawings of a gang of hunters standing close to jab spears in the underbelly of the taller mammoth. The Historic Landmark area teaches visitors how to use an atlatl to throw a spear. None of the fiber products (spear shafts or throwing devices) survived the thousands of centuries since the Clovis People used them. Only the stone tools of the Clovis People survived. There is no way to know their hunting methods. 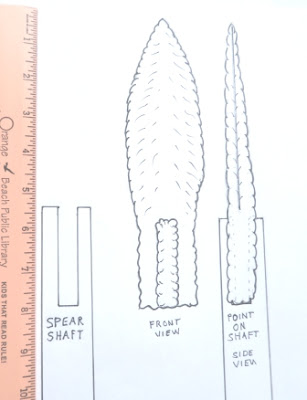 The Clovis people were nomads. They roamed freely, but in the search of food, not sightseeing. They traded with other communities, because we have evidence about where the flint, or chert, came from. The evidence shows they traded flint and knapping skills between communities.
Over a period of 50-100 years, the use of Clovis points spread across North America. Trade and sharing among the communities explains the wide spread use of the Clovis design.

DNA
DNA material collected from a burial site indicates 80% of native people in the Western Hemisphere are direct descendants of Clovis People -- that is today's Native Americans. The DNA indicates the Clovis People were descendants of people indigenous to Northwest Asia. Some believe this indicates they crossed the “land bridge” between the Alaskan-Russian straits to populate the Western Hemisphere. The confounded element is historians didn’t believe the “land bridge” existed in those days—so much for experts. ;-)

Archaeologists debated for years if the Clovis people were the “first” people in the Western Hemisphere, but Carbon Dating evidence from South America indicates Paleo-Indian communities in the south may be 2,000+ years older than in the north. Which raises the Question:
How did they arrive in South America? By canoe from the Pacific Islands?
Ah, the topic for another Post.

You may ask what does this story of the “First People” have to do with “the Old West”?
This post answers Custer’s Question: Where did all those Indians come from?

Thanks for reading my Blog, Traveling the West.
Frank Kelso

PS: If you like reading Traveling the West, you can log on at: http://bit.ly/ThePosseWEB
I’ll give you a copy of my latest book if you join.
Posted by frank-kelso at 8:20 AM No comments: 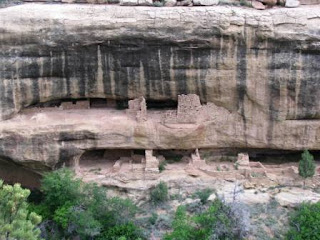 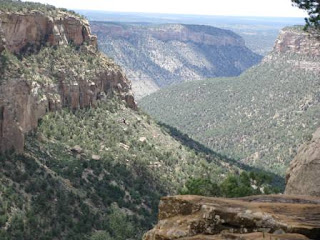 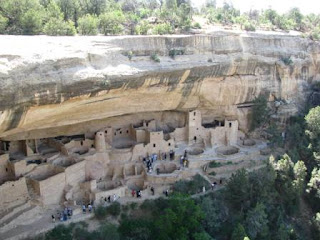 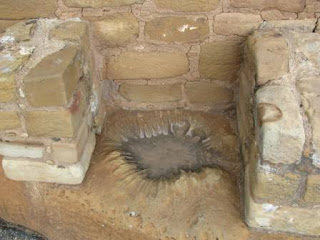 Posted by frank-kelso at 5:39 PM No comments: