After Civil War began, and until May 1873, the Rio Grande valley, from the Big Bend to Del Rio, represented a lawless, wild territory that gave the Texas border its bad reputation. A report in the Texas State History Assn claims that losses south of San Antonio to the Rio valley totaled $23 Million in 1870 dollars ($20 Billion today). The losses stalled the post-war Texas economy.

To put the problem into prospective, this area covers 60,000 sq. mi., about the size of Georgia. With less than 4,500 people living in the region, raiders wanting to steal cattle and horses, often burning the ranches, took what they wanted. Let’s be honest, the Kickapoo got the blame for most of it because the “Official” government position wouldn’t blame Mexican “bandidos.”
Then as now, each side blamed the other. The US government vilified the Kickapoo Indians. However, the Mexican Government welcomed the Kickapoo, who promised to fight the Comanche and Kiowa that raided deep into Mexico every winter, when cold weather on the plains made hunting difficult. In return, the Mexican government gave the Kickapoo land to roam free and hunt plus regular payments (to leave the Mexican population alone), which was far different from the controlled reservation system the US offered.
President Ulysses S. Grant. tired of the fruitless negotiations with Mexico, ordered General Sheridan to solve the problem. In the absence of written orders, General Sheridan “asked” Colonel Ranald Mackenzie, the Commander of the 4th Cavalry, to put an end the Indian raids by crossing the Mexican border to destroy their base and eliminate their ability to continue fighting.
On May 17, Seminole-Negro scouts reported to Mackenzie that most of the Kickapoo warriors rode from their camp near Remolina, Mexico. Mackenzie took five companies from the 4th Cavalry into Mexico during the night on back trails found by the Seminole scouts. After dawn the next morning, Mackenzie’s troopers struck the Kickapoo Camp capturing 140 (mostly women and children). The Cavalry continued south to destroy nearby Lipan and Mescalero Apaches camps. The troopers burned 180 dwellings and food storage huts. In addition to the Kickapoo prisoners, they captured Costilietos, an important Mescalero chief. Colonel Mackenzie led his troops north to re-cross the Rio in late afternoon while herding 65 capturing horses. Thus ended an era of Texas history.
After the Remolina Raid, the Kickapoo negotiated the release of their women and children in return for the tribe returning to an Oklahoma reservation. About half of the tribe refused to return to a reservation, staying on their land in Mexico, but foregoing their raids across the Rio.
Today, the Kickapoo tribe has a Casino in El Indio, Texas, 8 miles east of Eagle Pass.
I mention this piece of  history to place my recent blog reports on Uvalde, Ft. Clark, and Eagle Pass into perspective when writing about the undeclared Border War that caused havoc along the Rio for over a decade.

If you want my version of these events, please read my book, California Bound, which describes the lawless Texas border around Eagle Pass in 1866. https://www.amazon.com/dp/B0741WPB1N
Thanks for riding along,

The Stone building is the Ft. Clark Quartermaster and Commissary Building. 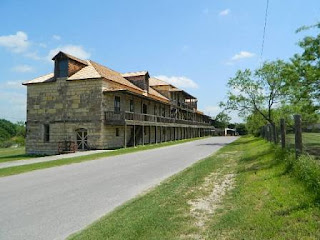 That me in the Ft. Clark Jail outside the Visitor's Center. 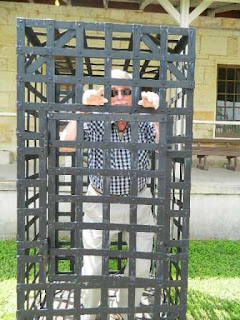