Did you ever want to live in a historic cavalry post? Have I got a deal for you? ;-)
You can own your own two-story barracks, or one of the officer’s quarters, at Fort Clark Springs. An enterprising developer bought the entire Army post in the 1970s to make the historic buildings available for sale to private owners. The stone buildings, built in the 1880s, are protected under the National Historic Registry to preserve the original design of the Army Post. This means if you buy a building, you can modernize the interior, but you must leave the exterior in historic condition to preserve the heritage.
The US Army established Fort Clark in 1852 as part of the Treaty to end the Mexican-American War of 1848, which led to creating the border we recognize today. The Treaty acknowledged the responsibility of the Federal government to prevent Indian raids into Mexico. The Comanche, Lipan Apaches in Texas made annual journeys across the Rio in the winter, first to gather food, horses, and women, and second to escape the harsh winters on the upper plains.
To cross the arid west Texas desert, the Comanche relied on springs to rest and water their horses and themselves. Whatever name the Comanche once called the springs at Fort Clark has become lost in the white man’s version of history. The Spanish called the springs, and the creek it feeds, Las Moras. As part of the Treaty, the Army also created Fort Stockton in west Texas near what the white man called “Comanche Springs.” Another of these Army posts was Fort Duncan in Eagle Pass, Texas. The Army established similar posts in New Mexico and Arizona to limit raids from the Apache native to those areas. The strategy was to deny the “Indians” a place to rest or regroup before and after raids into Mexico, and it worked.
The scarcity of building materials led the Army to leave these posts open, that is not enclosed by a stockade or walls. When wire fencing became practical, the Army enclosed the post with these fences. I mention this in case you wanted to visit to warn that you would NOT find a Hollywood style wooden stockade with a wooden gate.
For historical reference, the Buffalo Soldiers were stationed here, along with the well-known Seminole-African Scouts. Colonel Ranald Mackenzie operated from this post when he ended the Comanche wars after his winter attack on Palo Duro Canyon, the winter haven of the Comanche. These soldiers played an important role in ending the Indian Wars in Texas. In more recent history, General George S. Patton served as the post commander in the 1930s when it still had the last mounted Cavalry unit in the US Army.
The Post Visitors Center has an extensive collection of period weapons, Cavalry gear and sabers. I always surprised at how much of these materials survived to create an great exhibit.

The little village outside Fort Clark’s gate may be well known to many of you—Brackettville. Founded as a water stop on the San Antonio-El Paso mail road, the town flourished when Fort Clark was an active post. When Fort Clark closed, the town faded.
In it's time (1865-1930), Brackettville was the poster-boy for sordid saloons and red-light districts, litterally across the street, from the Army post's front gate. If there was any written record, it became lost. I couldn't find any newspaper accounts. of events such as shootings or arrests.
Its well-known neighbor, the Alamo movie location and buildings, closed to the public several years ago, but is available if you want to shoot a movie.
Before you get the impression that buying a house to live on this post is the end of the world, Uvalde is a 30-min drive east, where shops, services, Wal-Mart, medical offices, and a hospital are available. Uvalde is a small, friendly town who welcomed this stranger. 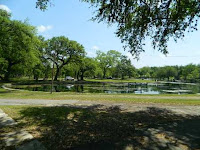 The pic on the right is the springs lake. There also is a pool and swimming area.

I remind everyone, my next book, California Bound, launches on Aug 16. You're invited to attend the Facebook Party from 8-9:30 PM https://www.facebook.com/CABoundBook/

The pic below is the Post Commissary and Quartermasters Building. 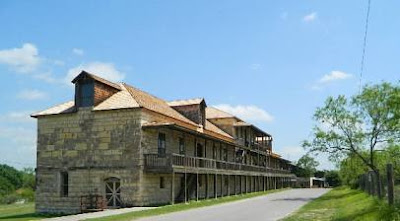