For unknown reasons it failed to appear on my Blog page.

If you read it previously, I apologize for my confusion.

Ben Franklin tried to “catch lightning in a bottle” to charge a Leyden cell in 1752. From Ben’s basic research, primitive as it was, he coined terms we still use today -- capacitor, dielectric, and electrician. The key term for today is “dielectric.”

Ben demonstrated the dielectric (glass) held the “charge” from the lightning inside the Leyden cell (foil lined glass-bottle.) Modern physics defines a “dielectric” as a substance or medium that can sustain a static electric charge within it. (That same “static spark” kids find when rubbing their feet on a wool carpet and touch another.) 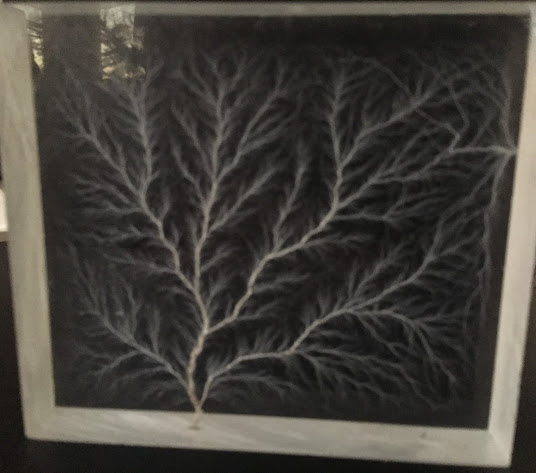 Sci-fi fans may recognize some of these terms from early Star Trek and sci-fi novels. “Captain, the reactor is leaking. Its glowing with Cerenkov Radiation.” Or “Jim, the flux capacitor needs to recharge before we can go to warp speed.” (If interested in Cerenkov Radiation, Google it and look at Dr. Don Lincoln’s excellent YouTube video with a minimum of technical details.)

As Ben Franklin discovered, the dielectric holds its charge. The “tree” that appears inside the Lexan in the above photo was created inside when its 65-kV charge was shorted to ground at a point on its base. The internal electric energy sought the easiest path to “ground” and melted a path inside the Lexan as it burned its way through. Like true “lightning,” it flashed and dissipated in an eye blink.

The “tree” captures the effect of a lightning cloud-strike to ground with about the same energy as it recreated for Ben Franklin’s “Lightning in a bottle.”

Fortunately for the United States, Ben didn’t pursue his scientific interests and joined the group seeking independence from Great Britain. Ben Franklin was the only founder to sign all four founding documents: The Declaration of Independence, the Treaty of Alliance (with France), the Treaty of Peace between Great Britain, France and the United States, and the U.S. Constitution.

I hope you found my bit of nostalgia enlightening. (Pun intended.)

Meanwhile back at the “ranch,” I’m busy working on two new westerns series and a collection of western short stories.

Thanks for riding along,